On August 25, 1998, Lauryn Hill released her Grammy Award–winning solo album, The Miseducation of Lauryn Hill, shaking up the music industry and changing “best of” lists forever.  Just ahead of its 22-year anniversary, the powerful collection of songs is still shaping the lives of listeners — even ones who weren’t yet born when the album first dropped.

This summer, youth aged 10 to 18 joined the Art Inspired Healing Collective for The Miseducation of Self, an eight-week workshop centered around understanding emotions, self-awareness and healing. The Dallas City of Learning program used six tracks off Hill’s album and linked them to the 12 Stages of Healing. “Everything Is Everything,” for example, related back to stages four, five and six: Reclaiming Your Power, Merging with the Illusion and Preparation for Resolution.

The workshop, which was held almost entirely online, was an organic extension of the work that the Art Inspired Healing Collective was already doing in the community. The team — Nikisha Patton Handy, King Shakur and Jonathan “GNO” White — was regularly holding Poetry+Healing=Balance Open Mics at Pan-African Connection.

Patton Handy described the pH Balance events as a place of healing, where community members could release whatever it was that was inside them. Although adults made up a majority of those audiences, there was one occasion where youth were in attendance. That simple change sparked an idea.

During their regular lunches, Patton Handy and King discussed a potential summer program and settled on Hill’s solo album as a way into the workshop. “Things like the Miseducation of Self, to me, are meant to be born,” King said. “And just over our conversations, us being the artists and the healers that we are, Miseducation of Self was born, through music, through writing, through understanding the 12 Stages of Healing.”

The goal of the workshop was to give learners tools to understand and express their emotions, using music and art as vehicles to heal. 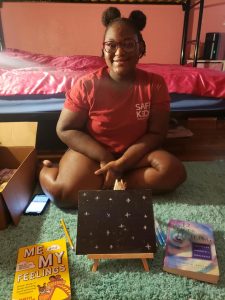 “We saw the opportunity for the summer program,” Patton Handy said. “So what we did is we took that and packaged it in a way that was accessible to children.”

For the first seven weeks, The Miseducation of Self learners met through Google Classroom to work through the songs and stages of healing. Switching the camp from an in-person experience to digital learning was a challenge, but one the team navigated together.

Patton Handy emphasized the importance of creativity and building relationships with each learner, while King’s advice to other educators working on online programming was to be flexible. “Be ready to pivot and be willing to pivot,” he said. “It’s a whole new ballgame, it’s a whole new world, and we’re all figuring this thing out. It’s not going to be perfect.”

The workshop culminated in a safely distanced open mic night at Pan-African Connection. “We had two children create art collections,” Patton Handy said. “And we had a child that went, and it was her first time singing out loud or having solos, and she sung not one but two songs.”

The open mic night was an opportunity for family, parents and friends to support the learners and see them express themselves. For some, it was also a chance to see how much their children had grown throughout the workshop. “In speaking with the families, they were really thankful for the program, and they really believed that their children did need it,” said Patton Handy, who added that during the spring when schools stopped in-person learning, some of those youth had shut down and become quiet. Parents were left unsure of how to engage emotionally. 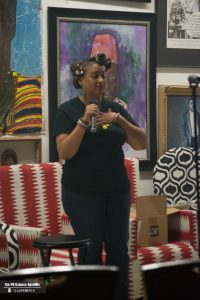 “For me, it being able to give [youth] a resource that gets them in touch and allows them to be able to properly identify what those emotions and feelings are — and to feel OK about being that way,” Patton Handy said.

Providing these resources is especially important to the Art Inspired Healing Collective because it gives a new generation the tools to create a new narrative around feelings and emotions. “A lot of what our culture is is to be strong and to hold it in and not cry,” Patton Handy said. “Vulnerability isn’t a weakness, but it’s something we can build on as a strength if we use it in the right way.”

It’s this approach to emotion and self-awareness that the Art Inspired Healing Collective will continue bringing to the community — helping adults and youth alike.

For more about the Art Inspired Healing Collective, visit 2inspirepeace.com, and be on the lookout for the organization’s October event, a workshop and open mic night using Prince’s “When Doves Cry” to examine family violence and healing.