With online story times, dance classes, and sing-a-longs, the Dallas Public Library’s SMART Summer was one to remember

“This is what they come to us for, and we need to do it.”

That was the attitude Melissa Dease and her fellow Dallas Public Library (DPL) staff members adopted while putting together virtual summer programming in the wake of the COVID-19 pandemic.

“We had a summer all planned out,” said Dease, the DPL’s Communications and Youth Services Administrator. “We basically looked at that and said, ‘All right, what can we turn into an online program?’”

The answer? With a flexible staff, just about anything. Despite a limited budget, furloughs, and a lack of equipment, the Dallas City of Learning/Big Thought Learning Partner put on their action-packed SMART Summer with Mayor Eric Johnson. 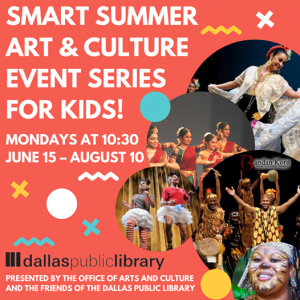 From online writing workshops to singalongs to classes on West African dance, the diverse slate of events kept kids learning and engaged. In particular, Dease said, the virtual story times and animal programming were hits. ”Everybody loves animals,” she added, laughing.

But one of the most successful programs of the summer wasn’t internet-based at all. A kit of take-home STEM activities was an instant success, prompting high praise from a mom who was hoping to limit her kid’s screen time. “She was so grateful to have this kit, and her son loved doing it,” Dease said. “It made them start doing other science-type projects at home.”

The kits’ success was a reminder for Dease that parents are starting to look for things beyond computer-related activities—they’re hoping for live interaction and something different. And as virtual programming continues to be a part of our everyday lives, thinking outside the box is more important than ever.

The DPL’s new take on programming not only required new technology, but it also necessitated a new way of thinking for library staff. “We have 29 locations, so normally we have programming 29 times,” Dease said. “The staff had to look at [things on] a system-wide, city-wide level in a way that they hadn’t before.”

With that adjusted approach in mind, the DPL put together their usual annual summer reading program. Typically, when a child, ages 0-18, reads for 10 days in a row, they get to pick out a free book of their choice at their library branch. This year, participants were required to fill out a form whenever they earned a reward, which the staff would then file. That meant, Dease said, tracking down the book, putting it in a bag with a label, and then sending it to the child’s local branch for curbside pick-up. 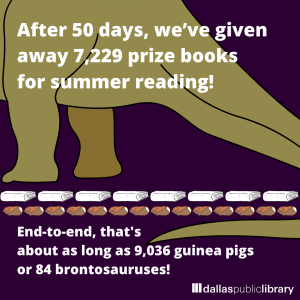 On the busiest day of the summer, the staff pulled a whopping 457 books.

The added physical toll of the program was just one of the challenges that DPL staff faced head on. Social distancing made certain tasks more difficult (including pulling books), and navigating different technology wasn’t without hiccups. They also had to deal with lower turnout numbers among kids as well as their own worries and anxieties.

But every undertaking was part of a larger effort to keep kids learning, an important part of battling back the summer slide. “The fact that we were able to do as much as we did is a testament to how mission-driven our staff is,” Dease said.

Along the way, Dease and the DPL crew learned a few valuable things. For one, they realized that providing an avalanche of materials at the start of the summer overwhelmed parents. Instead, they had a much better response when distributing curated information that directed to something specific.

But perhaps the most important lesson was that it’s all right to mess up when you’re navigating uncharted territory. If a video isn’t perfect or something doesn’t go quite right, don’t sweat it. Or, as Dease put it, “Don’t let the effort to be perfect stop you from trying to do something.”

Thank you, Dallas Public Library, for making this SMART Summer one to remember.